Not of the State Fair, unfortunately. Not that I'm not a winner there. I don't think they've done the judging yet (though I don't expect to be a winner there).

No, I'm a winner in a Phat Fiber giveaway. I won a spindle, which I assume will be lovely, though I have no idea what it looks like. There was a post on the blog saying that there were lots of unclaimed prizes, and we should go back and see if we were among those bestowed. I knew I hadn't won... had actually just told my friends the day before that I love the whole idea of the Phat Fiber box/blog/giveaway, and that I intend to donate to it soon, but that I hadn't won any giveaways yet. But I checked previous winner posts, and there I was. In June. I had won a spindle from Zebisis Designs. Somehow I'd missed the announcement and my spindle was languishing for 7 weeks, feeling abandoned. Now it will get the love it deserves.

Time to get my own samples ready. I know which fiber I'm planning to use. Probably. Ok, I've at least got it narrowed down.

No pictures. Sad. I like having pictures. Ok, how about this? Me at the beach last week, on my way to a sunburn. 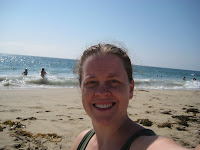 Have a good weekend!
Posted by The Spinning Daisy at 11:10 AM