I can do anything!

Several years ago, I was at my friend Sarah's rugby game and I saw a kid, probably about 6 years old, wearing a cape and running, and climbing a fence.  I thought, "If I had a cape, I could run too.  And climb, and do just about anything."  Alas, I was in my 30s, with no cape, and had doctor's orders
not to run or do other high impact exercises.  I continued to sit in my chair and watch other people run and climb and tackle and Do Things.

Two years ago, I was having trouble with both my lower back and my rotator cuff.  My left arm's range of motion was reduced, and I would wake up crying from the pain of rolling over in my sleep.  My back constantly hurt whether I was moving or not.  All my flexibility was gone.  I went to doctors (and chiropractors and massage therapists and acupuncturists and physical therapists), I eventually got a diagnosis for my back, and felt a little better that it had a name, if not a cure.

For my shoulder, they put me in the MRI machine, but the best they could come up with was that something was inflamed.  They didn't know if it was the tendon, the bursa, or something else.  When they told me the non-diagnosis, I felt this moment of complete despair - "How will I become an Olympic gymnast if I can't do the 'stuck landing' pose?"  After a couple of seconds considering this tragic loss of potential Olympic glory, I remembered I was 38, not in great shape, and I quit gymnastics in 6th grade because I was afraid of all the moves that involved being off the ground.  I was not likely to need a "stuck landing" pose. Ever.

This year I turned 40.  As everyone who put up with me for the previous several months can attest, the idea of turning 40, of being in my 40s was causing me a great deal of stress.  I thought it meant that it was too late to change anything.  I don't know what I expected 20 years ago - I don't think the concept of turning 40 ever occurred to me then, to be honest - but I knew that I wasn't living my fairy tale life... partly because I don't even know what that is.  And even if I figured it out, I already felt it was too late to change.

As I was moping in the weeks leading up to my birthday, I remembered that boy with the cape and told a few friends about it.  Things just seemed so possible for him, and not for me. 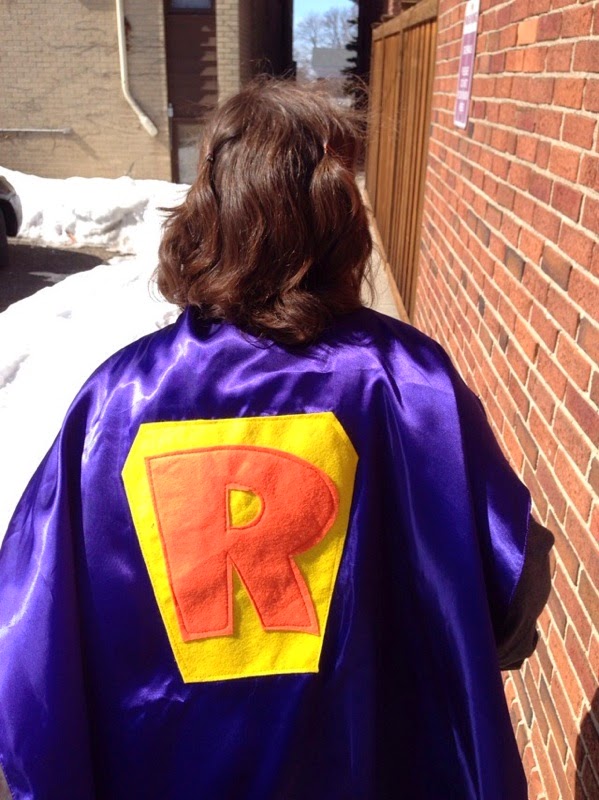 Well.  I now have a cape.  Sarah heard me and bought a lovely purple cape (with an orange and yellow R for Rebecca) for my birthday.  When I wear it, I feel confident and happy and like I can do anything.  Maybe even fly.  Even when I'm not wearing it, I know that I Have a Cape, and I have all the powers the cape represents.  As soon as I got the cape, I knew being 40 would be ok, and haven't been mopey about it since.

And, as I was reminded, while I may not be able to change my life up until now, it's not too late to change.  I simply have a different starting point.  Now, I just have to figure out where to go... and if I can fly there.

Posted by The Spinning Daisy at 5:43 PM